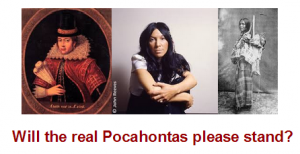 The largest minority at NMC is Native Americans, and yet we have many misconceptions based on movies, television, and other portrayals.  Most of us can easily separate  fictional qualities of famous females such June Cleaver, Roseanne Barr, Ellen DeGeneres, and Sofia Varga (Modern Family).  Are we able to make the same distinctions between  Buffy St. Marie, Sacajawea and Pocahontas?

This may be affecting our teaching and learning more than we think.  In fact, across the country Native Americans have the lowest college completion rate of any group.  This Thursday, December 5 at 7:00 pm NMC’s Dennos Museum will present the movie, Our Fires Still Burn, as well as hosting the movie’s director and members of the Grand Traverse Band of Ottawa and Chippewa.

Rebuilding and creating new traditions to succeed in our current environment–politically, socially and economically, without losing their sense of community is the focus of the 60 minute documentary.  After the film, questions are encouraged and a discussion will be held among participants and special guests.   Federal Indian boarding schools such as Mount Pleasant’s closed in 1934.  Private schools such as Holy Child in Harbor Springs stayed open until 1982.  Some of these former boarding school students are the grandparents and parents of our students today.

Passivity is one of the unintentional legacies of the boarding schools occurring in today’s students.  A lack of focus is another such legacy.  Although non-native students may also exhibit these traits, strategies to engage and motivate them may be different.  For example, some students respond well to being called upon and drawn out of their comfort zone, whereas some native students might respond by withdrawing further–including potentially dropping or failing the class.

To learn more about the Mount Pleasant boarding school, use this link to watch Indian Schools:  Stories of Survival.

Overview Article on Compentency-based Ed
Every Step of the Way