Caregiving101: A Look Back at My Sabbatical

I stepped away from my formal responsibilities at the college in 2018-2019 and took a year’s sabbatical. Doing so provided an opportunity to immerse myself in a period of planned reading, researching, thinking, and writing. The experience was invaluable.

What did I focus on during that time and what did I learn? Let’s take a look.

The 15-month stretch provided an opportunity to focus on the essay, the genre I’m most drawn to and teach. During the time away, I cast my lens on narrative nonfiction, an essay form that employs features of creative writing; yet, as the term suggests, the stories are anchored in truth. I’ve never been a fiction writer so, as I wrote, I found myself in puzzling territory, which meant I felt like a first-year writing student. It was a humbling experience. As it should be, I told myself. Writing is laborious work, requiring patience and grit. I was in the thick of it, practicing a new form and struggling to locate a relaxed voice while producing hard stories – in my case, what it was like to care for my spouse living with Alzheimer’s disease. Again, like a first-year writing student, I felt I’d been assigned subject matter not of my choosing.

But time was of the essence, so I practiced my craft and maintained a steady work schedule, which had me arriving at my favorite neighborhood café most mornings as it opened. Fortified by caffeinated drink complete with frothy milk, I put words on the page. Somedays the words came with relative ease, and some days they hung back. Knowing that writing and revising in isolation is never advised, I reached out to seasoned writers from the community who kindly agreed to join the ad-hoc writing group I proposed. The process was simple: we emailed work in progress to one another a week before coming together in person. Doing so allowed time to read drafts and respond with pen in hand. Neither the meeting location (my kitchen table) nor the main course (Costco quiche) shifted. We met monthly, usually on Thursday nights. My fellow writers offered direction and encouragement, and their critiques guided my revisions. Some of those essays have found their way to publication. Here’s one written in vignette form: What It’s Like. 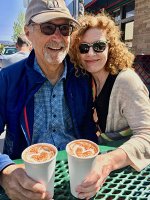 John Hagen and Deirdre Mahoney. John passed away in 2020.

When I proposed sabbatical leave in January of 2018, my husband, John, was still living well with his illness. He walked our dogs through the neighborhood, cycled local trails with friends, and even worked out with a trainer at the gym. Terminal illness claims its own trajectory, however, and muscling through it only works as an antidote for so long. Suddenly, John needed additional care. This meant that during the week, he spent some days in adult daycare and other days with hired help who came to our home. Against my wishes, our adult son who has never listened to his mother (me) stepped in to help care for his dad as well.

There it was: Caregiving 101. The unexpected shift in John’s illness forced me to consider my role anew and further illuminated the ways in which caregiving shuns consistency and thrives behind the scenes at home, in the workplace, and in the classroom. The evolving experience helped me better imagine the employee trying to maintain a “life-is-normal” persona while carrying out campus responsibilities. I could better imagine the student quietly caring for a family member while enrolled in classes – and if that weren’t enough, likely clocking in at a job to boot. I came to better understand that in American culture, family caregiving remains mostly invisible. Conversation happens in whispers.

When I returned from sabbatical, academic advisor Kim Schultz (now retired) and I launched a caregiving learning community. A group of faculty and staff from across the college participated in the launch during NMC’s Professional Development Day in 2019. Colleagues took turns introducing themselves and courageously sharing their caregiving stories. We learned that some were doing their best to care for aging parents from a distance; some were caring for children living with complex disabilities and illnesses; some needed help locating appropriate care facilities for family members; some wondered how to finance care; some sought guidance in initiating a conversation about memory loss with a parent; one talked about a parent with dementia having been victimized by telemarketing scammers. The content was diverse yet contained a common thread: caregivers feel a sense of isolation and loneliness in the workplace; they’re conflicted by how much to share; many find it difficult to concentrate as they experience the constant tic of angst; they’re eager for support but often afraid to ask for it.

Throughout the next year, the initial group of employees whittled itself down considerably. Finding a time that accommodated diverse schedules and needs was one challenge; keeping the group afloat once Covid-19 took hold was another. While the learning community no longer meets, it’s safe to assume caregiving continues to be a considerable concern for NMC employees.

This spring, I will further build on the work of my sabbatical as I launch a themed English 112 course focusing on caregiving. Those studying healthcare and social work seem the obvious population, yet assuming caregiving belongs uniquely to these students would be a mistake. Rosalynn Carter captures the reality succinctly with this statement: “There are only four kinds of people in the world. Those who have been caregivers. Those who are currently caregivers. Those who will be caregivers, and those who will need a caregiver.” Carter’s insight demonstrates that regardless of career ambitions, the subject matter is practical and always timely.

So, how have I shaped the course? We’ll read about caregivers carrying out crucial responsibilities who didn’t train for the role but, nonetheless, manage a host of responsibilities every day as they care for family members or friends. Guest speakers will offer knowledge and share experiences. Ultimately, students will draw on the caregiving content as they practice skills of academic writing – research, summary, analysis, synthesis, and argument. The aim is for students to leave the course with a deeper understanding of human vulnerability and our human response to it.

As I review my sabbatical notes, I realize that even though I’ve gone over my self-imposed word limit, there’s material I haven’t covered. I’m happy to talk further with anyone considering a sabbatical or with those who have questions or observations about caregiving. In the meantime, this report from AARP and the National Alliance for Caregiving offers insight into a compelling population of students, some of whom will be enrolled in our classes this spring: Staying the Course: How Dual Responsibilities Create Challenges for Student Caregivers.