Sports dominated the TV this weekend with Red Wings games and Michigan State playing in the Final Four.  Watching, I thought about how successful coaches and players maintain intensity until the last possible second and how as instructors we can do the same for our students as they finish out the semester.  Out of curiosity, I looked up some statistics.

Home teams have won about 52% of extra-inning games in the last 50 years. (Baseball Reference Blog) 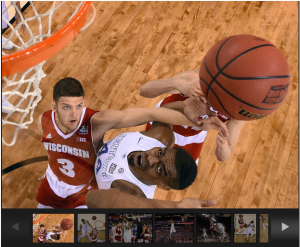 In football, a 2013 data analysis of 22 professional quarterbacks found that for fourth quarter drives, “306 of the 416 games did involve a fourth-quarter comeback as well.”

Andrew Thomas of Harvard University looked at four seasons of NHL data to see if the 25,000+ goals scored were evenly distributed…(and) concluded that the Poisson distribution works for most of the game…If the score is tied late in the third period…if the go-ahead goal is scored in the last five minutes of the game, that team has a 95 percent chance of getting the victory.  (Live Science)

Clearly, motivation can actually increase for those who are behind going into the final stretches.  If it is a given that in professional sports most factors are as equal as the system can make them, the difference must be something more intangible.  Pulling another statistic from one of my favorite blogs, “giving people the “because” behind why you are asking them to do something increases the possibility of cooperation from 60 to 94%” (Frances Cole Jones quoting Ellen Langer’s Harvard study).

Dr. Amjad Khan shared some of his NMC students’ success stats and strategies in this previous post, “Beyond Early Feedback.”  Perhaps now is also a good time to revisit sharing your Significant Learning Outcomes with your students and focus your instructional coaching on helping them start their own game winning drive for success.