36 years ago a friend of mine who was the office manager in the Communications Office, Barb Maylone, called me after my husband and I returned from a year in Tennessee with an 8-month-old baby boy. My husband had been studying to be a glass blower and me supporting us by working in a shirt factory (I was no Norma Rae!) had returned back to TC to have our son near family and friends.

Barb had told me about a position opening up in the Business Office, part-time, from 3-8 pm, as an office manager for the night time instructors.  Roberta Teahen was the director at that time and Carol Taberski the full-time office manager.  I must have called them 3-4 times a week, they finally caved in because I got the job. I worked a year there learning and loving the environment and the people.  I was going to finish my degree and go into social work, but then…

…a year passed and had heard that there was an opening in the Library for a full-time office manager.  Lucky for them I didn’t have to harangue them by calling daily, a simple job application and an interview worked.  When I finally was interviewed by Mr. Bernie Rink, I had to bring in our 1 ½ year old son, Evan, in with me!  There was no daycare available, parents lived 200 miles away, and so I called and explained and they said come in anyway.

The head librarian, Elaine Beardslee (“Mrs. B” as the student workers would call her), took Evan by the hand while Bernie interviewed me in his office.  I can’t really remember the questions asked nor my responses, all I could think about is having Evan being watched in the library, by a stranger, and how quiet is he being for her and the students trying to study.  I had heard rumors that Mr. Rink would hold up “Goodbye” signs to students who were too loud in the library and heaven forbid if they snuck in food and drink!!!!  What I do remember when leaving Mr. Rink’s office is seeing Mrs. Beardslee and Evan having fun on the ramp, him running up and down and Elaine smiling with glee. 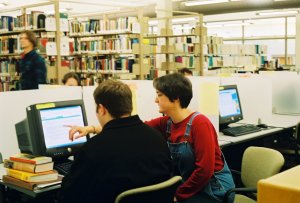 Oddly, I did get the position after all that!  That Library director, Mr. Rink, retired a year later and I have worked with 6 library directors since then.  Mrs. Beardslee, my hero of the day, became my hero and dear friend of a lifetime.  She took me under her wing and became my mentor for the next 15 years until her retirement.  She continued to come in and volunteer 3 days a week up until 3 months before her passing on May 24 of this year.

The friend who called me about the Business Office part-time position had worked at NMC has also since passed, but her love and concern will always be with me.  I hope that I have carried on their love and support of NMC.

It has truly been a great place to work.  Seeing the students come in, ask questions, talk to them and ask questions back, has been so rewarding to me.  Having students come up to me when they leave NMC to further their education and actually thank me for doing my job, is heartwarming and again, so rewarding.  I can’t thank my colleagues in the past and present enough on what an experience it has been working alongside of each of you and learning from you.  You all are so giving of your knowledge and want to spread all you know to everyone.  It has been an honor and a privilege to have worked here at NMC. 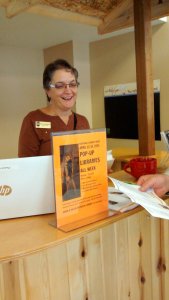 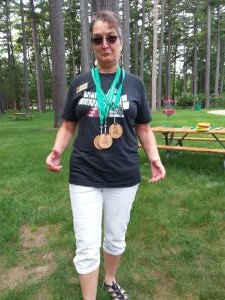