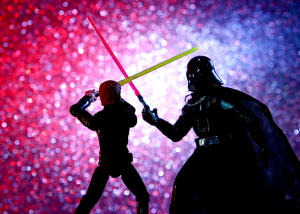 Image by JD Hancock/Flickr; used under CC BY 2.0 License

Since many of us are waiting in anticipation of the newest Star Wars episode, I thought I might use that for inspiration. I recently watched a TED talk by Will Wright (found here), twice. Will is a game developer and has most notably created SimCity, The Sims, and Spore. We was presenting on Spore, his latest creation. Will invented the gaming genre of the non-shooter, non-winning games. In his games (or toys, as he calls them), you as the gamer are able to do something and then observe the consequences of your actions. He wants his gaming fans to be more akin to George Lucas, directing the gaming experience, rather than Luke Skywalker, where the game happens to him.

I think this is a great way to think of our own classes. We want student buy in. In essence it is their education, not ours. So why do we, as instructors, control it? Can we give the students more control over their own education? Can we make them a Lucas instead of a Skywalker?

View all posts by Nick Roster →

One Response to Skywalker or Lucas?