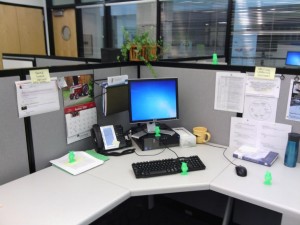 Sometime this weekend, my office space was invaded by owls–lots of them.  On the keyboard, the bookshelf, the top of the cubical wall,  and on piles of paperwork, but I was thrilled with the Monday morning leavings.   Months ago I had started imagining owls, and after telling a co-worker  we even researched owls together.  The more we learned, the more people we wanted to talk to, and our imaginings solidified as we added more possibilities along the way.

“She’s crazy as a loon,” you may be thinking.  In fact, imagining the owls was a smart use of existing resources to solve a common problem that had Mark DeLonge and I  stymied–creating a thank you for a diverse group of intrinsically motivated faculty who had shared their teaching wisdom in our second annual 4 x 4 x 16 Blog Challenge.  Budget not included, of course.  Touring an instructor around NMC’s student maker space, the idea was hatched.  Why not use what we have to showcase examples of ideas-to-action?

Using the 3D printer highlighted some unexpected outcomes to people and relationships not often mentioned in articles about using new technologies.  Yet, these benefits are often 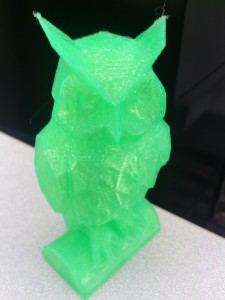 Interested in trying something for your own area?  Come on over to NMC’s maker space in the Parson-Stulens Building and get started!

The Impact of Accessibility on Students and Instructors
Free Office 365