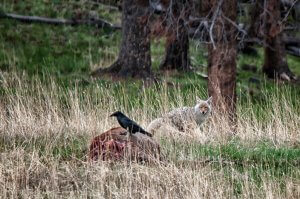 Raven and Coyote in Yellowstone

Last week my mythology class was reading about trickster figures. Tricksters are playful, amoral, charismatic, and, well, tricky. After reviewing typical actions and attitudes of trickster figures, I asked students to form groups, choose a contemporary character (not involved in politics!) whom they thought functioned as a trickster and then write up a brief overview of how that character demonstrated some of the trickster qualities we had discussed. I then announced that in 15 minutes, the first annual mythology class trickster conference would convene and we would hear from 6 panels about 6 different contemporary tricksters.

Walking through the classroom as frantic planning commenced, I was amused and bit startled  to hear one of the groups joke about how “Dr. Sprenkle could be our trickster figure.” Apparently, they didn’t realize I heard them because they jumped a bit when I said “You might be surprised to hear that is not first time I’ve been called a trickster.” They laughed and continued with their analysis of the Weasley twins as tricksters, but I ruminated a bit about how sometimes we might really seem like tricksters to our students.

The class session I just described could be seen as a benevolent trickster move. I’m “flipping hierarchies” or “disrupting order” by asking students to take authority and present examples of the day’s concepts. I also invite students to see learning as play (not hard to do when I’m teaching about tricksters). Sometimes my idea of play is seen as dubious, not to be trusted. For example, the week before last I assured them that we would have some fun with structuralism and Claude Lévi-Strauss and Oedipus Rex. Clearly my idea of “fun” doesn’t always match theirs.

It may seem like an oxymoron to see iconic authority figures such as teachers as tricksters. In the stories, tricksters are often not fully human or animal and operate both inside and outside the community. For example, Raven becomes a chief’s grandson by tricking his daughter into swallowing him as a seed. That seed then becomes a baby. It acts like a baby and even tricks the doting grandfather in it’s toddler baby form. Teachers on the other hand are clear (almost archetypal) authority figures. We represent order and stability; however, I think we also have a trickster-like ambiguity that, while necessary for learning, also creates incredible stress for students. We pull, perhaps lure, students into ambiguous situations and states where they have to change things up to create solutions and applications rather than memorize answers. They have to problem solve and practice tools/skills which they will not master in our classes. When we do have them memorize concepts or terminology, we are demanding that they add ideas and terms to their linguistic repertoire which they may not fully understand yet. We enjoy seeing students have “ah ha!” moments, but we sometimes forget that change, seeing things in a new way, stress, and adrenaline precede those moments. Tricksters leave the scene of chaos or creativity they have instigated, and the community, like our students, must adapt to the changes that result.

View all posts by Melissa Sprenkle →